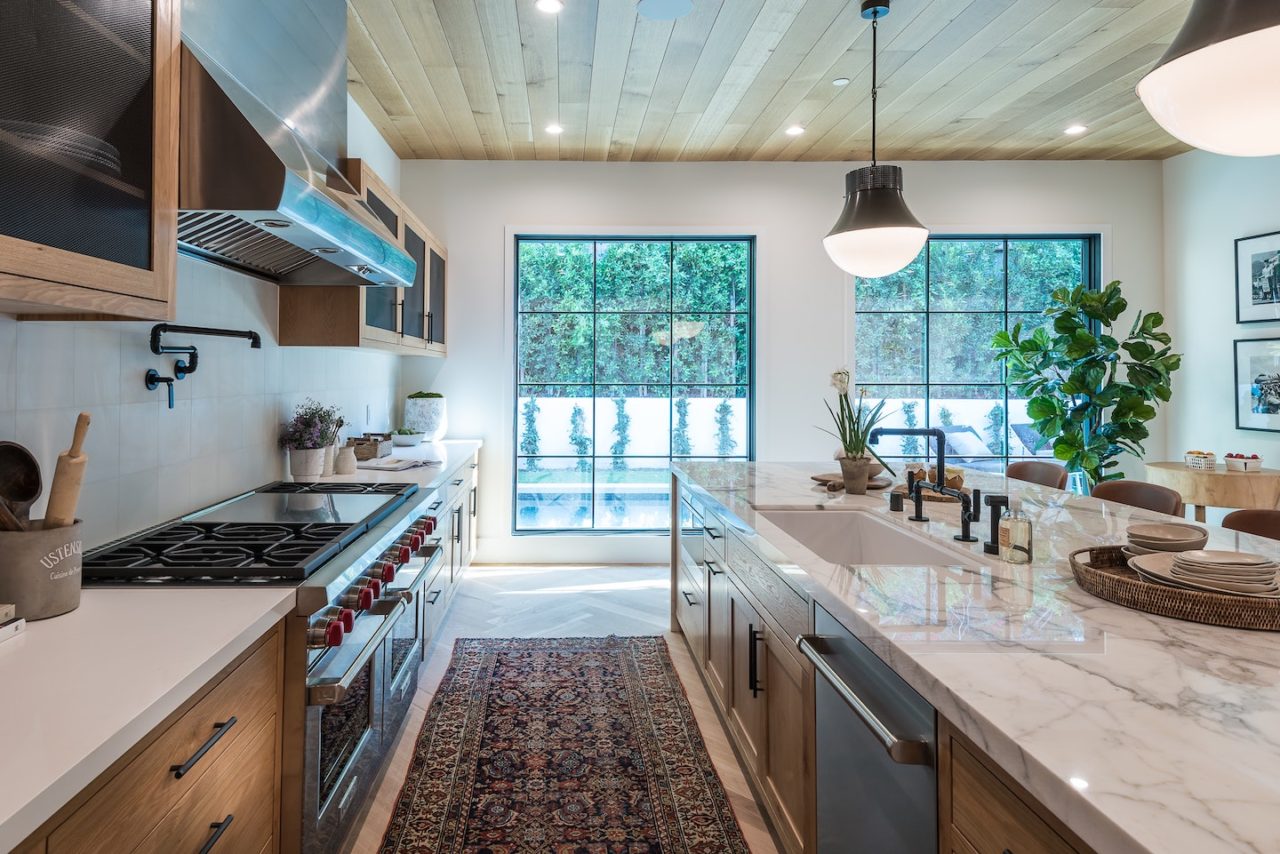 Looking for a touch of inspiration? We’ve tracked down four of the most jaw-dropping kitchens in the world to give you some great ideas for renovating your kitchen. Some of them may be more practical than others…

Why jaw-dropping? Never has a blend of ornate furniture and chic, minimalist design looked so good.

This Hollywood power couple purchased a beautiful Georgian-style mansion in NY back in 2019. And while the entire house is gorgeous, the kitchen is the real highlight. Right in the centre of the kitchen is one of the most ornamental, elaborate islands we’ve ever laid eyes on. Likely to be hand-carved, it’s the epitome of grandiose. But what makes this kitchen truly jaw-dropping is the fact that the traditional island is surrounded by modern features. Think black and white tiling and marble worktops. And it works.

Why jaw-dropping? It’s not what you think. This is the stuff that industrial kitchen dreams are made of.

It’s easy to imagine the Queen’s kitchen as being ornate and over-the-top fancy. But it’s the complete opposite. If you’ve been dreaming about industrial kitchens, then the catering facilities here will leave you with some major kitchen envy. Designed for mass cooking, the kitchen features a marble island surrounded by stainless steel appliances and splashbacks. Shelving units are filled with copper saucepans that date back centuries. It gives even the most well-equipped restaurant kitchen a run for its money.

3. The kitchen at NOMA

Why jaw-dropping? The kitchen of the world’s best restaurant has a strict ‘less is more’ policy.

NOMA has been crowned the best restaurant in the world many times. Foodies flock from all over the planet for the experimental tasting menus. But when visitors peek through into the glass-enclosed kitchen, they don’t find what they expect. NOMA’s kitchen appears pretty bare from the outside. But the truth is that the designers have just been incredibly clever with the space. Heated countertops boast built-in compartments for utensils, while ovens, chillers, and freezers are tucked away underneath.

Why jaw-dropping? You won’t find many families brave enough to use these colour combos!

OK, so The Simpsons is just a TV show. But the family kitchen deserves a place in our list of most jaw-dropping kitchens from around the world. Why? Because even if the colour combinations don’t exactly tickle your fancy, you’ve got to hand it to Marge & Homer for being so brave and bold in their choices. Not ones to shy away from a colourful kitchen, they’ve chosen wooden cabinets with purple doors and blue handles. A bright green fridge and matching cooker. And yellow curtains to finish off.

Although not all of these kitchens will be your style, they do show how there are many different ways to create a kitchen that makes your jaw hit the floor. There’s no single route to building that ‘wow’ factor! For a quick, affordable and effective kitchen makeover, check out our beautiful range of replacement kitchen doors.

The History of Shaker-Style Furniture

Top Tips for Making the Most of a Cosy Kitchen